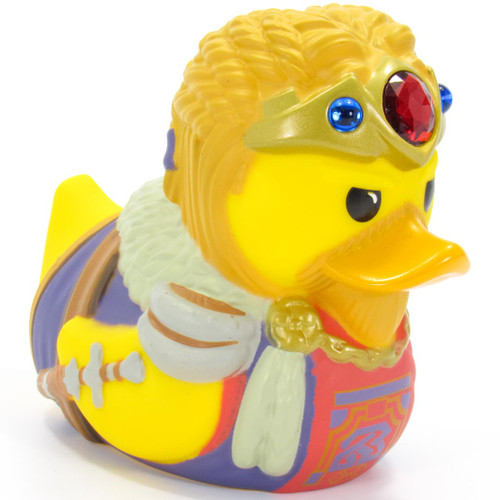 They are finally here!   Imported from Europe, these highly collectable licensed official rubber ducks from Tubbz represent characters from popular gaming and comic world.  Stay tuned for other styles arriving shortly. Email us if you would like other styles introduced.  They are quite pricey, but for the gaming or comic enthusiast...it doesn't get better than this.

FUS-RO-DUCK!’ The very noble Jarl Balgruuf used to be a human, but then he took an arrow to the knee.  This officially licensed collectable is part of the TUBBZ range, a highly collectable series of your favourite gaming, movie, TV show, and pop culture characters in duck form! Featuring amazingly detailed features, this incredible collectable comes complete in a displayable tub box. Alduin, Ulfric Stormcloak, and Jarl Balgruuf the Greater are also available!

Materials: Made of vinyl. Lead free and phthalate free
Caution: Small toys pose a choking hazard to children under the age of three. Use proper supervision.